Visit Bannack and return to the days of mining on the frontier.  Explore the many well-preserved buildings lining the main street of this ghost town. Learn about the boom-to-bust cycles of the former gold mining town and the hanging of the town sheriff by vigilantes in 1864.

Today Bannack is very different than it was when it began in 1862, over 150 years ago.  Early Bannack was a camp of tents along Grasshopper Creek where about 400 miners staked claims in the newly discovered placer gold find. Today see over 50 very well-preserved buildings along the main street. Join a handful of visitors walking the rustic wooden sidewalks in this old western town.

Start at the visitor center to get oriented. Learn about early Bannack and its role in the first major gold discovery two years before Montana became a US territory.

Wander the town at your leisure. Most of the buildings are open to the public. Many have examples of items which were used in the building or in the era it was built.

These are some that were highlights for us. If short on time, be sure to make these stops a priority.

This building was primarily a drug store but was used as a general store and an assay office. School classes were even held in it when the regular school was under repair.

This gorgeous 2-story red brick building was built in 1875 as the Beaverhead County Courthouse, the first brick courthouse in Montana. It closed in 1881 when the county seat moved to Dillon.

The building sat empty for 10 years until it was purchased by Dr. John Meade. He added a large kitchen, dining room and living quarters to the already large building, converting it into the fancy Hotel Meade. It became the center of Bannack society and a home for many travelers. The hotel closed and re-opened several times as the prosperity of Bannack changed, closing permanently in the 1940’s.

Cyrus Skinner opened his saloon in spring 1863. He was friends with the town’s sheriff, Henry Plummer from their time together in San Quentin Penitentiary. While Plummer may have been sheriff, he was also reputed to be the leader of an outlaw gang, the “Innocents”. The saloon was a popular place for them to gather.

Vigilante justice often “solved” criminal issues in early mining camps. The Innocents were accused of robbing and murdering many miners in the last half of 1863. Though there was little evidence tying Plummer to the Innocents, vigilantes decided they would hang Plummer and the rest of the gang.

On January 10, 1864, Plummer and two others were hanged on the gallows just outside of town. By the end of January the vigilantes had executed over 20 of the gang and had run the rest out of the territory.

It was alleged that Skinner was a spy for the gang. He abandoned his saloon and ran but was tracked down and executed. His saloon was converted to a general merchandise store.

When the circuit riders came to town they used whatever building was available for their church services. They might even use a saloon. One of these traveling ministers convinced his congregation that they needed a building which was solely used for worship. In 1877, the Bannack Methodist Church was built and is the only church ever built in Bannack.

See the first jail in the Montana Territory built in 1863. Prisoners were chained to the metal rings in the floor. If the prisoners looked through its front window, they saw the gallows in the valley, a reminder of their potential fate.

Schooling in Bannack’s early days was paid for by the children’s families much like today’s private schools. The first classes were held in a home but as the town grew, a basic log building was made available to serve as a school.  The number of children continued to grow and, by 1874, the need for a public school became apparent.

Bannack’s Masonic Lodge came to the rescue. They constructed a building which provided the lodge a proper meeting space on the second floor and a K-8th grade public school on the main floor.  This school operated here for 70 years closing in the 1940’s.

For a stunning view of Bannack and the valley, walk up the hill to the cemetery, past Bachelors Row behind the church.

The first miners who arrived after the discovery of gold were men traveling without their families.  They slept in bedrolls under the stars, or in small tents, or even in wagons close to their claims. They spent all their time on their mining efforts which worked well in the summer and the early fall. To survive the harsh winter more suitable housing was needed. The dense row of small one-room cabins on the north of the main street was the solution. Each had a corner fireplace, a couple bunks, several shelves and a table with stools.

The fenced cemetery, used between 1862 and 1880, is high on the hill. Everyone was buried in this cemetery, regardless of vocation or wealth.  Today most of the grave markers are gone. The more sturdy markers are still readable showing that death claimed both the young and the old.

This is a quiet place to look out over the valley and imagine what it looked like when gold fever struck here in 1862.

Bannack began as a small mining camp for the miners working the first gold discovery in the area.

In July 1862, John White and a group of prospectors discovered placer gold along the banks of Grasshopper Creek. Their camp was several miles downstream. Since the gold was quite plentiful, White filed a claim to protect his discovery, which put the word out. The first gold rush was ON, in the soon to be territory of Montana!

Residents and pastimes of Bannack

Bannack had the usual places for miners to be entertained and spend their hard earned gold. There were saloons, gambling halls and brothels. “Hurdy Gurdy” Girls, who danced with men to entertain them, were paid by the dance. The girls were not considered “respectable” even though most were not prostitutes.

There were dances two or three times a week. These were considered acceptable and agreeable entertainment for married and single “Ladies”. Picnics, horseback rides and fishing provided residents with some fun in the summer. In the winter there was ice skating and sledding.

The easy to reach placer deposits along Grasshopper Creek were quickly gathered by the huge influx of miners in the first months. By summer 1864 many of the first miners were lured away by other gold strikes. One of those strikes was near Virginia City where territorial capital moved in February 1865.

In addition to the placer deposits discovered by White, Montana’s first quartz mining claims were made here in 1862. Stamp mills to crush the mined ore soon operated alongside the placer mining. Gold was mined from both hard rock and placer deposits.   As technologies changed in both methods of mining, Bannack went through boom and bust periods.

The town survived through the 1870s as the county seat until it moved to Dillon in 1881.  Many of our must-see buildings were built in this time period.

When the easy Grasshopper Creek placer deposits were depleted, ditches were dug to bring water to the deposits higher up the valley sides. The water, under high pressure, washed away the dirt over the beds into sluice boxes to recover the gold. This mining method continued into the 1890’s when the placer miners focus shifted to the gravels of Grasshopper Creek.

The first successful electric gold dredge in the United States was built in Bannack in 1895. The dredge boat was a large platform onto which the creek’s gravel was dropped after being pulled from the creek by massive buckets. The gravel was sluiced on the boat separating the gold from the rest of the stone which was returned to the creek. This was such an efficient method of mining that 4 more dredges were constructed over the next 7 years.  By 1902, the gold in the gravel of the creek had been mined out, ending major gold mining in Bannack.

As the value of gold and its accessibility decreased, mining was no longer economically viable and Bannack slowly died. In the 1930’s the mines didn’t operate regularly and they were closed down completely by World War II. The post office closed in 1938 and the school closed in the early 1950’s.

The gold mined from Bannack’s placer deposits was incredibly pure. Gold is typically found with silver and usually the gold nuggets are between 80% and 95% gold. Grasshopper Creek’s nuggets typically had a gold content of 99.5%, similar to refined gold. Shops accepted this pure gold directly as currency.

It is estimated that the mining district around the town produced gold valued at about $12 million between 1862 and 1930 when the average gold price was about $20 per ounce. This is one of Montana’s most productive historic gold mining areas. Records note that the placer deposits alone, between 1862 and 1876, were estimated to have produced about $3 million of very pure gold.

Preservation of Bannack – 1954 to now

As early as 1947 concerned Montana residents began preservation efforts as Bannack emptied. Beaverhead County Museum Association began purchasing buildings and property in the 1950s. The association owned 17 properties and donated them to the state in 1954. The sale required that Bannack not become a “tourist town” but be preserved as the “ghost” of a town.

Bannack became a National Historic Landmark in 1961 helping to ensure this legacy would endure. Bannack State Park was established in the 1960’s. The state purchased the remaining buildings over the next 3 decades.

The guidebook for the park notes “Bannack is ‘preserved rather than restored, protected rather than exploited’. We attempt to retain an atmosphere of the past with a sense of remote isolation and abandonment“. They have succeeded.

To experience a bit more of what it was like when Bannack was a thriving town, visit during Bannack Days.

This 2-day annual event, held on the 3rd weekend each July, celebrates frontier life. Learn how to pan for gold. There are demonstrations of old-time dancing and pioneer crafts such as candle making. Enjoy wagon rides, music and fun for the whole family. There may even be a gunfight on Main Street.

Where is Bannack Ghost Town?

Bannack is 26 miles southwest of Dillon Montana. Take I15 south to Highway 278 then head west for 17 miles. You’ll see the State Park Sign at Bannack Bench Road then it is just 4 miles south of there to the parking lot. 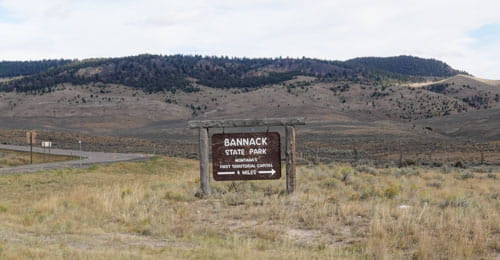 Is there Camping in Bannack State Park?

Yes. The state park has two campgrounds but no hookups or dump station.

Yes though hours vary depending on the season. Check the Montana State Park website.

Bannack is just one of several ghost towns in Montana. Check out our full article, Montana’s 7 Best Ghost Towns, to explore more abandoned towns on a 3-day road trip.